Important information for people fleeing Ukraine who are not Ukrainians:

The following notes apply to LGBTI people who were still living in Ukraine (e.g. for study or work) on February 24, 2022, but do not have Ukrainian citizenship:

There are first reports that some foreigners authorities (Ausländerbehörde) in Germany urge non-Ukrainian people, who had lived in Ukraine before fleeing to Germany, to use the IOM return programme to leave Germany or to file a conventional application for asylum.

However, this group of people should not allow themselves to be urged into a conventional asylum procedure if they fear persecution and discrimination if they were to return to their country of origin. They should rather insist that the immigration authorities issue them a preliminary certificate (Fiktionsbescheinigung) stating that they have applied for a residence permit in accordance with Section 24 of the Residence Act (Aufenthaltsgesetz).

These simplified procedures are similar to conventional asylum procedures, as in both kinds of procedures it will be examined whether the persons concerned would actually be at risk if they were to return to their respective countries of origin. However, in case of the simplified procedures, this examination will not be carried out by the “German Federal Office for Migration and Refugees” (BAMF), but by the respective foreigners authority (Ausländerbehörde).

In any case, it is advisable for people who have fled to Germany from Ukraine and who do not have Ukrainian citizenship to seek advice from specialized counseling centers and, if necessary, to search for legal support.

With regard to cases of LGBTI third-country nationals who have fled Ukraine, LSVD asks refugees, counseling centers and supporters to inform us by using use the contact form. In these cases, LSVD can support the foreigners authorities in assessing the risk situation in the respective countries by sending comprehensive LGBTI-specific country of origin information.

[These notes reflect LSVD’s understanding of the current legal situation and of the letter from the German Federal Ministry of the Interior (BMI) of March 14, 2022.] 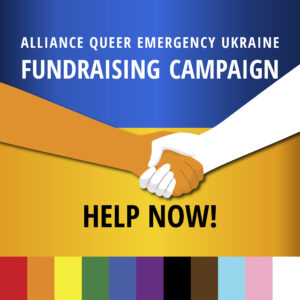